On any day, the announcement of the first black, male editor-in-chief of a Vogue iteration from the quadrumvirate of global fashion capitals is a monumental deal. On the morning of April 10, 2017, the revelation that Ghana-born Edward Enninful is to be the new editor in chief of British Vogue was validation of the personal sort.

Why was this such a momentous moment for fashion? Well, while Enninful’s appointment was not a complete surprise— discovered by stylist Samuel Foxton, he was a model at the age of 16, rose in the ranks to i-D magazine’s fashion director by 18, and holds an OBE for his contribution to the industry— he was not the frontrunner for the position: he hardly fits the fashion mold even if it has always been his métier.  The industry’s paucity in diversity both behind and on its alabaster pages and stages is a storied issue. As such, a black, Ghanaian-born, Ladbroke Grove-bred man, however well-heeled he is in the industry, is no practical person’s idea of a shoo-in for  top dog at Vogue, an editorial object of worship in industry noted for its lack of ethnic heterogeneity. Furthermore, Africans specifically have felt excluded from the global fashion discourse, the continent reduced to a source of “inspiration”, yet its people rarely allowed participation. So, though progress has been made in that which concerns inclusion in fashion, one cannot overstate the cultural significance of Condé Nast’s decision to entrust the reigns of this metonymy of British fashion into the hands of someone of Enninful’s variegated background. And if his record is anything to go by (from his recent “I Am An Immigrant” campaign to his role in Franca Sozzani’s “Black Issue” of Vogue Italia), he is certain to keep things interesting, proving that there is room for unconventional voices in fashion’s symphony of ideas. 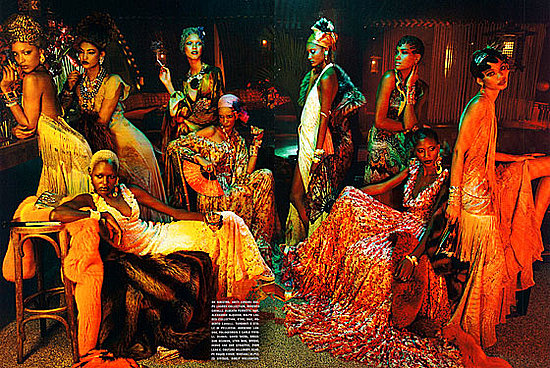 As a Ghanaian-national, US-resident creative and writer about things that include fashion, given the intersection in our existential Venn diagram, Enninful’s sultry black and white headshot was explicably ubiquitous in my social media feed the morning of the announcement.  The wave of ecstasy that had crept over the fashion set was just as palpable in the Ghanaian web presence. Even a (Ghanaian) friend who cannot differentiate between a bin bag and brocade posted the announcement to my Facebook wall with the caption, “This should make you smile”.

Why were Ghanaians so thrilled? Well, for obvious reasons: while his appointment is welcome news to believers in diversity anywhere, Ghanaians everywhere were claiming a win over our friendly rivals in all things (especially Jollof), Nigeria.

Bragging rights aside, with the news of Enninful’s appointment swimming into my ken on a day when I woke up ready to give up the ghost in my creative pursuits, he became an oriflamme of hope, a fuel of which I had been in short supply. Besides opening my eyes to a cavalcade of emails rejecting several pitches, I had recently had a hyperbolic exchange with my mother that climaxed with her asking me when I was going to get a real job and start making some money. When would I give her something about which to brag to her friends? Why am I so selfish that I have refused to make her proud? (In her defense, she came back the next morning with a standard-issue WhatsApp motivational message to which I replied in jest, “pick a side!” I know she’s doing her best, loving me fiercely the best way she knows how to.)

I joined the creative class rather late for numerous reasons, not least of them being that as a Ghanaian, society hardly ever allowed me to think of creativity as a career direction. Stop me if you’ve heard this one before but, as Africans we are, by and large, raised to feel that the strata of career options are, in descending order, doctor, lawyer, engineer and disgrace to the family. This tacit belief that creativity was not serious meant I never allowed my creative inclinations to metastasize beyond a whisper.  Instead, I studied neuroscience (which I enjoyed and a decision I do not regret) and I was to continue my education in some scientific arena that preferably culminated in the letters MD. I am, instead, currently standing on the lowest rung of the “viable vocation” ladder, having heeded the creative call at the Methuselahan age of 30 years after 7 years of working in HIV research.

We’ve heard similar stories of and jokes about parental disdain from Nigerian-British comedian Gina Yashere both as herself and as the immortal Mrs. Omokorede. This is not to say that this is a uniquely Ghanaian or African issue. In fact, I once chuckled that chuckle of solidarity when I read Indian-American playwright, Snehal Desai’s account of his mother’s reaction to his admission into the Yale School of Drama: “Perhaps you can take some classes at the law school while you are there” was the tenor of her reply.

Before I committed to the belief that I was to excavate the questions of existence through art, rather than science, admitting this desire to myself was even harder than admitting it to my parents.  I suspect that one of the reasons I never had not allowed the dream in me to metastasize beyond a whisper is the thinness of the roster of Africans in positions of global creative authority. Or as they say: you can’t imagine what you don’t know. In other words: representation matters. In fact, my mentor and big sister  (who was featured in Vogue Italia’s “Black Issue”), during our “come to Jesus” brunch used the tactic of story-telling and example-giving to show me how people (all of them recognizable names, all of them “coming to Jesus” epiphanically) in her world had turned their art into their livelihood.

Which brings me, albeit in circuitous fashion, back to the significance of Enninful’s appointment to me (and to our society): he has become one more example (and we can’t have too many examples). Listen, he is not magic– he can’t singlehandedly change our attitude the pursuit of art, but he is ever the more a visible Ghanaian/African figure working in the world of creativity and doing so to global acclaim and his presence is puissant. When I think of all us who have left creativity “shut up in our bones”, all the “mute and inglorious Miltons“, the thwarted-in-the-seed Jimmy Jams and Terry Lewises we may have lost to the notion that art is just a frivolity, it touches me to think that some young Ghanaian creative might allow herself or himself to dream different, “impractical” dreams because the symbolism of Edward Enninful as British Vogue Editor in Chief.

As for me, it may prove easier for a camel to slither through the eye of a proverbial needle than it is for an outsider like me to enter into as notoriously an insular industry of fashion. Sometimes my faith in my ability to do so is as parched as the desert. Everyday is a battle to prove myself and in many ways, I still feel like a foreigner to the form, somewhat because few fashion power-players are immigrants from my part of the world, but more-so because of the path that has led me here so late in life.

I still tend to see myself as an outsider looking and screaming into the abyss. To hear of this Fante man’s appointment as I woke up to a paltry bank account and flagging belief, his middle name Kobina as familiar to me as the Jollof we Ghanaians make so much better than Nigerians do, was to look into the abyss and finally see a little bit of myself looking back at me; to know that it is possible for the cream to rise to the top of the fashion firmament in spite of its origins; to hope that I am one day in a position to inspire similarly-inclined Ghanaian creatives, as he has me. 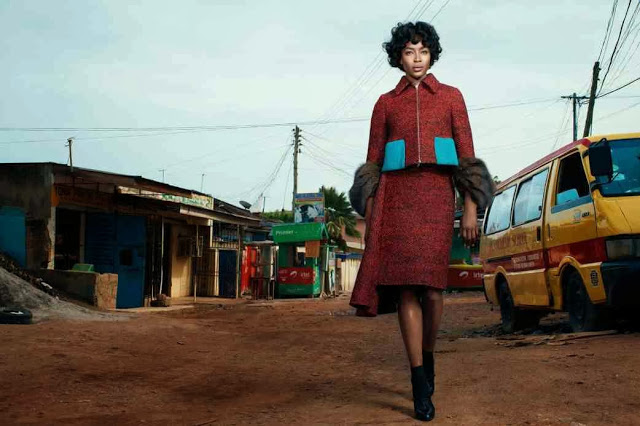 Mr. Enninful’s predecessor at British Vogue is known to have said, “People don’t want to buy a magazine like Vogue to see what they see when they look in a mirror.” While I concur with her point about crafting fantasy, I welcome opening to the masthead of the magazine and seeing for once, a mirror instead of a wall; a mirror in which I can recognize myself, a dreamer and doer for whom there can be seat at the head of the of the table.