There’s some ill planet reigns:
I must be patient till the heavens look
With an aspect more favourable…
I am not prone to weeping, as our sex
Commonly are; the want of which vain dew
Perchance shall dry your pities: but I have
That honourable grief lodged here which burns
Worse than tears drown…

Thus spake Queen Hermoine when, by her own king Leontes, she was wrongly accused of and pilloried for infidelity. The tides of her fortune had changed, her happiness poisoned by jealousy bred by her acts of kindness. She had little choice but to wait, patiently, until the storm cleared. She would wait a solid 16 years in that storm for the manifestation of said “more favourable aspect”.

In the midst of the storm (the term itself a bludgeoned cliché), we often have a number of platitudes rained upon us, not least of all the image of a certain sordid bird beating its wings out of ashen shame and soaring high above the powdery residue, into a sky as blue as the phoenix itself is tired of being the patron saint of those life is shitting on.

Sure, the notion of rebirth is reassuring. But, sometimes, the only way to weather to storm is to be in it; to exist patiently in the impression it paints upon one’s life; not to imagine the brand new day and its promise of song and dance, but to patiently wait – as the planets play musical chairs – right in the clamour of  the fall from grace.  Just as my life right now is a concatenation of errors so tragic, it can only be described as comical, so did a recent trip to Chicago meet me with darkness and snow on the single day I had planned to shoot with young photographer, Tyler Leiby. What choice did I have but to clothe myself in head-to-toe “void of existential anguish black” and trudge through the onslaught of sideways snow to the riverwalk a stone’s throw away from base-camp at the Virgin Hotel in downtown Chicago. Black is never boring. Add in a variation of textures such as the fleece finish of the sweater and the liquidity of  fringe and you might even be working with something interesting. 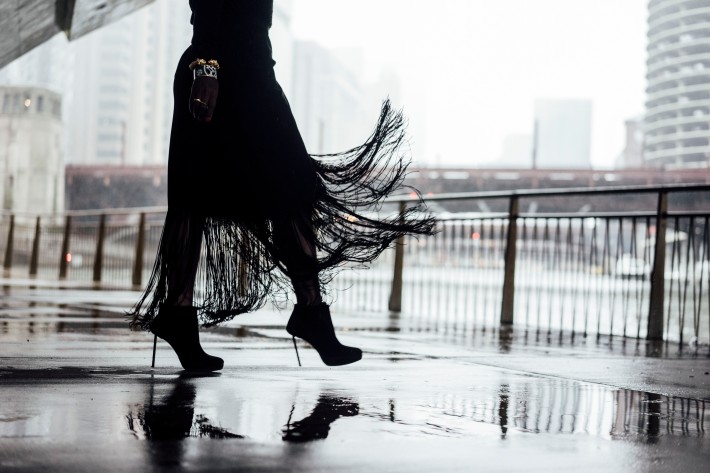 The snow was not welcome. Not that day at least. Me, in black, on an overcast day spelt photographic disaster in my inexpansive mind. Yet the storm ended up creating a mood of such gravitas in the images we captured, complete with puddles of reflection not unlike the results of our personal storms. Working under the oppression of the precipitation also spelt dedication to our mission — that whole rain or shine ordeal– but most importantly rendered a routine day all the more memorable. Scarcely has a life without toil been a memorable one. The storm may not have been welcome, but she came as she wished, and she made her impression on so much than Tyler’s paintings with light. 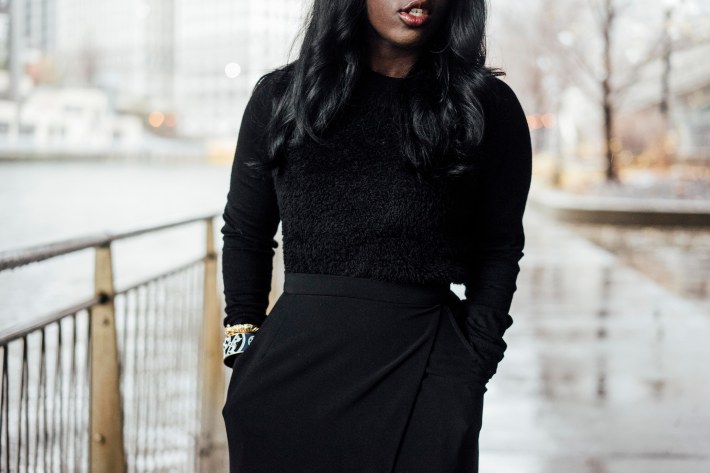 And just as she had come, she went away with the setting of the sun. So, the next morning, with the sun high in the sky and a frosty wind whipping through the skyscrapers of Chi-town, I put on the ensemble again, opting for a more sensible boot this time, and made my way to the famed Art Institute of Chicago, to live through another day of my own storm with art as anodyne.

If art is to play healer, what better place to start than in the impressive Impressionist hall of Chicago’s art emporium? A sprinkle of Degas here, a wash of Renoir there and finally a dose of Monet whose Haystack paintings from around 1890 were themselves an exercise in patience with light. The Haystack series showcase the varying colours of the mounds of hay as determined by the time (and thus light) of day at which they were painted.  These depictions meant that Monet “would rise before dawn, paint the first canvas for half an hour, by which time the light would have changed. Then he would switch to the second canvas, and so on. The next day he would repeat the process.” Even Monet had to acquiesce to the demands of the day. His oeuvre was the richer for it.

Édouard Monet and his fellow Impressionists are so called because they abandoned the neutral studio environment, with brush and and canvas in tow, to paint en plein air (in open air), in the thick of things, thus showing us that nothing is truly fixed; that reality is a colour- and shape-shifting confluence of ever-changing light and movement however grand or subtle. Identically, our very lives are as much coloured by our agency as they are by the umbrage of the heavens. When it is dark outside, only patience and remaining in the darkness will deliver you to sunrise at whatever its unknown appointed time may be. Weathering the storm is to be in the storm and to accept its impression.

A Sunday afternoon on the island of La Grande Jatte, 1884. Oil on canvas. Art Institute of Chicago.

What struck me upon first seeing this work in person is its unifying duality. I never quite grasped how pixilated the technique of pointillism (creating an image from small distinct dots of colour applied in a pattern) is until a saw something vast as this canvas, composed entirely out of things so small as these discrete dots of paint. Though the brushstrokes are so individualized, there is a multiplicity of stories to behold when one steps back and sees the forest for the proverbial trees. It is so easy to draw our vision in and get lost in the minute dot of paint, but then one loses the glory of the interwoven lives and stories; it is just as tempting to imbibe the triumph of living from a far, wowed by the complex choreography of characters in the space, but then one is robbed of the uniqueness of each pixel; cheated of the power of the individual narrative. I am trying to find the balance: to not get so lost in my storm as to fail to see the wonder of how my life is a pawn in a far greater story of human comingling, and yet to not be so awed by the bigger picture that I lose sight of that one dot, that single insignificant dot, one of the flecks of paint that tell the grand story on the canvas; myself.

May the storms in our lives be but dots in a rich pattern of dots of joy, of expectation, of fulfillment, of hope. And may we honour all of those dots, with patience for the ever-changing light, because they form the entire picture and map our very being. Just as well this season is tough one in my life: “a sad tale’s best for winter.” When we can’t muster the energy to dance in the rain, may we at least stand, impressed. 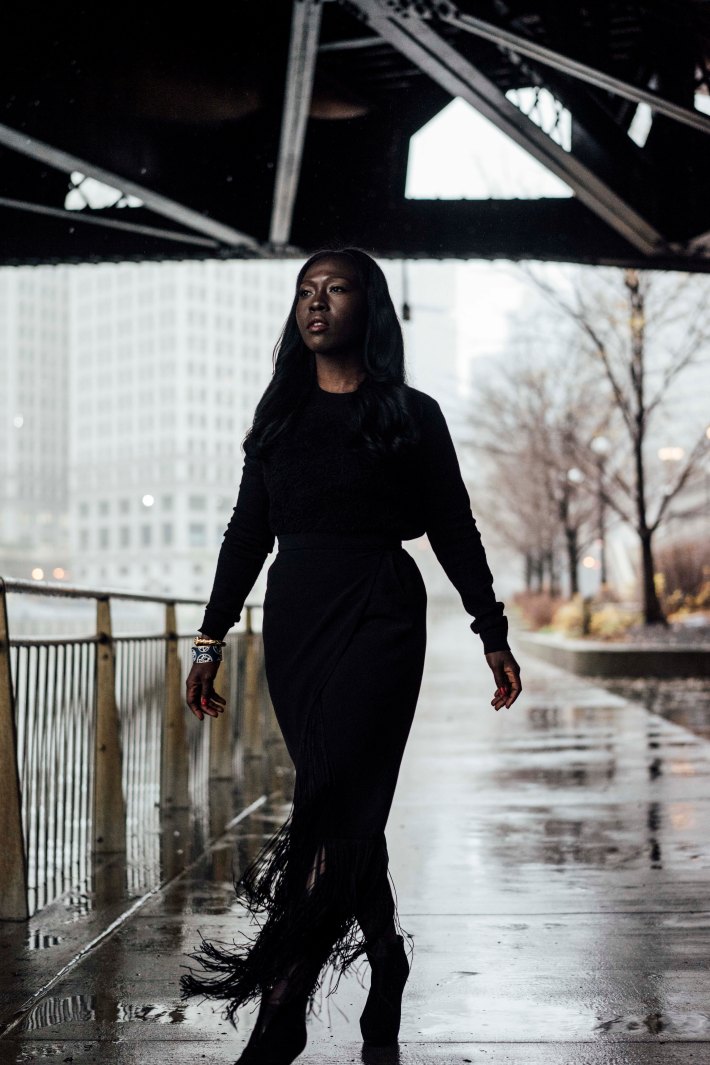