On First Looking into DuVernay’s Selma 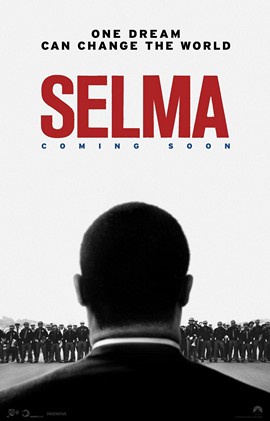 I finally made my way to the theatre last night to watch the much-talked about biopic and Civil Right’s drama, Selma. Don’t let the saccharin tag line hold you back: run, don’t walk…or march, run to a theatre near you to experience the meticulously metered dramatic unfurling of events that makes this film so resonant to so many.

As far as the subject matter of the film is concerned, I have dear friends with whom I respectfully and amicably disagree on the idea of “enough already with the downtrodden negro narrative.” Perhaps it is because I am not African-American and my inculcation in the history and culture has been via the voices of Toni Morrison and James Baldwin and Richard Wright and Countee Cullen and Nathan McCall, rather than having the reality of this existence doled down dolorously from generation to generation of my own family. Perhaps, this is why I have not grown tired of these stories, why my nerve endings have not been rubbed so raw as for me to cry “no more!” I do agree that, as  friend in the film business put it, there has to be something– with respect to the spectrum of films with roles for African Americans– in between Tyler Perry and 12 Years A Slave. That is to say, there must be room for art less one dimensional and more nuanced than the sordid eructations of the house of Perry, that is also not always the sort of cerebral and painful piece that Selma or 12 Years are.  Absolutely! But I will never grow weary of the telling and retelling of such brutally beautiful stories or such beautifully brutal storytelling as Selma, especially when the voices are as rich and limpid as Ava Duvernay’s and Paul Webb’s and the acting is a clean and piercing as David Oyelowo’s. Stories such as this one, stories that frustrate us because sadly, they somehow feel current, and in turn imbue us with pride in how much progress has been charted by humanity and fill us with veneration for the imperfect humans that are our forebearers; stories that rekindle dormant fires in us, sparking something in us, so that we may never to rest on our oars in struggles against inequality and prejudice; such stories need to be retold from generation to generation to generation. I left Selma with a deeper understanding of why Ferguson and Eric Garner are issues that have drudged up so much hurt in so many people. And I will drive down Atlanta’s Andrew Young and Hosea Williams Boulevards with a new sense of reverence, after seeing this men, these very human men, much more than street names, embodied with such conviction on screen.

But Selma is a film not a history textbook. It cannot and will not, understandably, appeal to all.  A story, however historic or timely is only as good as how it is told. What we have here is an exquisitely crafted work of art. Cinematographer Bradford Young poetically plays with light and shadow, almost allegorically alluding to just how gradated, rather than black and white, such events in history are. So much of the struggle happens away from light of public podia and the roaring fury of rhapsodic rhetoric. So much of the struggle is shrouded in the shadow of banal logistics, endless planning, and familial strain as is synecdochically illustrated in the scene where the husband and father, Martin Luther King, tries to do his duty by taking out the trash but is such a stranger in his own home that he tries in vain to find the stash of bin bags. So many are involved in the struggle. And so many are involved in making this film as good as it is. The supporting cast carries this film on their backs with stellar turns from the likes of Carmen Ejogo, who plays Mrs. King with deep and reticent poise. British actor, Tim Roth, is so successfully slimy and repugnant as Alabama Governor George Wallace, it is astonishing and unnerving all at once. So many shades of pain are cast on the face of the actor who plays the father of Jimmy Jackson Lee that I could have stared at his face forever and watched his perfect wrinkles melt into tributaries of pain: heartbreak.  Yet, it is not solid thespian talent that elevates Selma or the work of a master painter with light such as Young.  Oscar-nominated costumer design Ruth E. Carter has a hand in the success of the production. She has created costumes that sharply capture  not just the sartorial quintessence  of the era but mirror the severity and tone of the film in the muted colours employed: a mood is set that is the very cloth from which the film is cut.

Several scenes in this film are arresting in their profundity and clarity.  When the thick alabaster smoke of tear gas floods the screen as the throng of activists takes to the Edmund Pettus Bridge in their first attempt to traverse the bridge and march from Selma to Montgomery, there is a pervading sense that though they have not crossed the bridge, the have crossed the Rubicon.  As the air clears, and the camera settles unflinchingly on the flailing limbs of a people being flogged and dragged and brutalized, it as though I am seeing a history with which I am well familiar with new eyes. Like the feeling of discovery Keats describes in his On First Looking into Chapman’s Homer, on peering into DuVernay’s Selma, history, and as a result, current phenomena, took on a renewed poignance and permeated me so differently than it ever had before. Homer is as old as the hills but there was something about Chapman’s translation that left Keats feeling as though he had discovered a new planet. In a similar fashion, the story that the artists involved in the telling of Selma impart is not a new one and yet it occupies a space all of its own in the panoply of historically-inspired films about the African American experience.

What a powerful film. What beautiful faces of a brutal and beautiful struggle; a struggle which is far from over as there still remain many who are disenfranchised in this nation and beyond, LGBT rights being but one an example that comes to mind.  Such is the puissance of this sort of work: it is the mirror and the hammer that Brecht described art as being. It is only so because of the artistic merit of the picture itself: the how of the film and not just the what. An important story told poorly is more criminal and unforgiveable than a trivial one told weakly. DuVernay’s Selma is important story told very well indeed.  The victory of the film is that it is raw without being maudlin, sharp as a blade without being eviscerating, sombre without being a dirge, triumphant without falling into the trap of being a naive pean. Above all, the most veritable victory of this film is that, to borrow a turn of phrase from from Maya Angelou, while the drama speaks to the black experience, is talking about the human condition. Stories of struggle and of overcoming link us all, regardless of race, station or creed as we a reminded today, on National Holocaust Day.