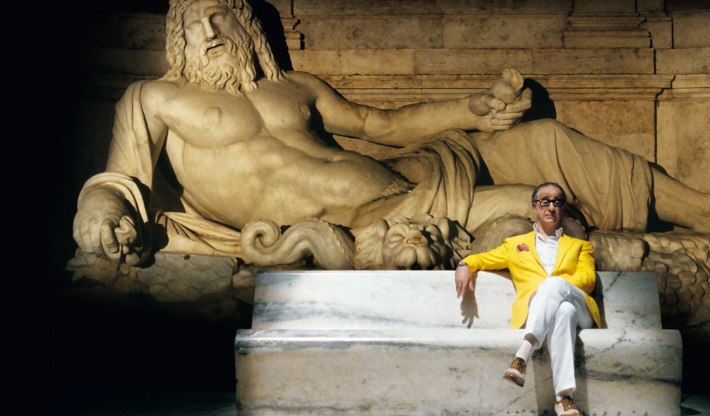 Paulo Sorrentino’s 2013 film, La Grande Bellezza is just that: a great beauty. The Oscar-winning film, which depicts the Prufrock-like life of 65 year-old literary artist, Jep Gambardella (played masterfully by  Toni Servillo), is pensive paean to the city in which it is set. Indeed, Rome is the title character of the film and the pulchritude of the historical city oozes out of the screen in what feels like a modern-day incarnation of Fellini’s La Dolce Vita. Like Marcello Mastroianni’s character Marcello Rubini in the Fellini chef d’oeuvre, Jep is a writer cum sapeur caught in the claws of an absurdly beautiful, at-times vapid, often fatuous  and always intoxicating life of the “gliterati” in the Italian capital. The impeccably-dressed Jep, however, plays out his awakening in riveting colour rather than black and white,  harkening, in my mind, back to the ubiquitous “yellow fog” of the Eliotian poem to which the film bears so much resemblance. In fact, Jep seems to glide around Rome in a heavy mental haze; a haze which thins out, as the plot thickens, to reveal to us the turmoil beneath his cool exterior.

The film commences with a quote from Louis-Ferdinard Céline’s Journey to the End of the Night: “To travel is very useful, it makes the imagination work, the rest is just delusion and pain. Our journey is entirely imaginary, which is its strength.”

The still above of Jep seated cross-legged in that daring canary-yellow blazer makes my mind’s eye travel to a sartorial selection of mine not unlike Jep’s. My imaginary journey thrusts me back into the joys of my real (if what is in the past can be considered real) journey to the very country of Jep’s reveries– Italia– only, my grande bellezza was not Roma, but the vast beauty of Lombardy’s Lake Como.

The life-sized window of our room in  the village of Bellagio on Lake Como overlooked the hotel’s grand gardens. For more shots of the OOTD, look below.

Lago di Como is simply one of the most beautiful places I have been lucky enough to experience in the flesh. To visit was a last minute decision made while in Paris for a friends wedding. My friend (another friend) and I left Paris early on a Wednesday morning last September, flew into Milan, caught the train from Malpensa to Saronno where we changed trains. A little overly eager, we hopped off the train two stops too early and had to race like ravenous beasts after a kill in order catch our ferry from the pier at Como Nord Lago to the village of Bellagio where we were to spend the sole night. It was entirely worth it: all the running with our luggage under the mediterranean sun. We caught the ferry and reveled in the 2 hour crossing of the lake that took us to our ultimate destination. The Hotel Grand Villa Serbelloni where we stayed  is the star of Bellagio, second in grandeur (on the entire lake) only to Cernobbio’s Ville d’ Este  so it is no surprise that Helmut Newton shot some of his most iconic images (see here and here ) right there. I could wax lyrical about how reclining by pool with the best view of the lago felt akin to being in Bardot film, or how truly quaint and colourful Bellagio is. I could try to capture in words how the mountains of Lombardy jut out of the lake’s glassy surface forming a vista that is hardly imaginable even when it is spread out before your own eyes. Or I could just offload a lake’s load worth of photos on you and call it a night. 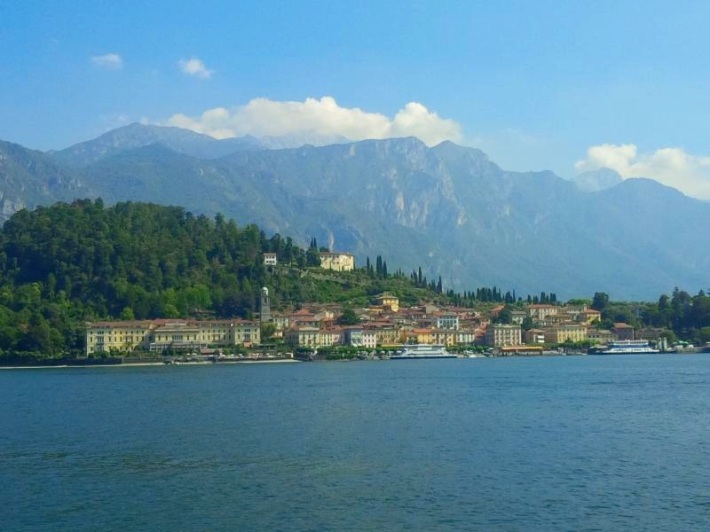 Scenes from the ferry-ride to Bellagio. The vast lake is lined by many villages, each teeming with villas that boast lush gardens bursting with colour and charm 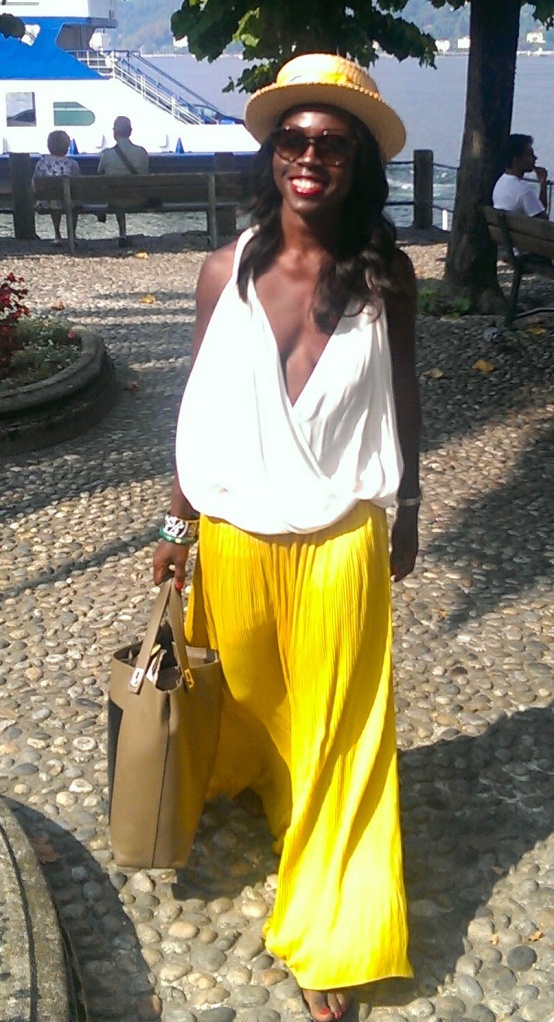 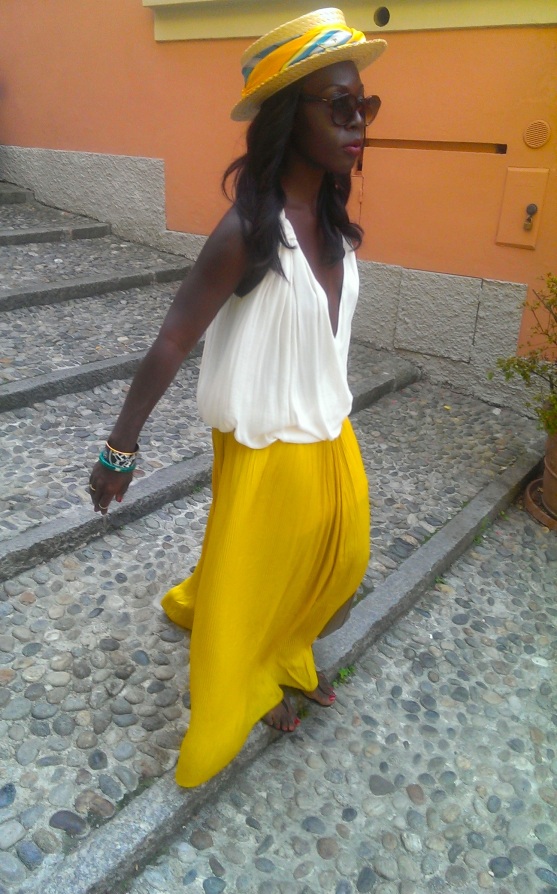 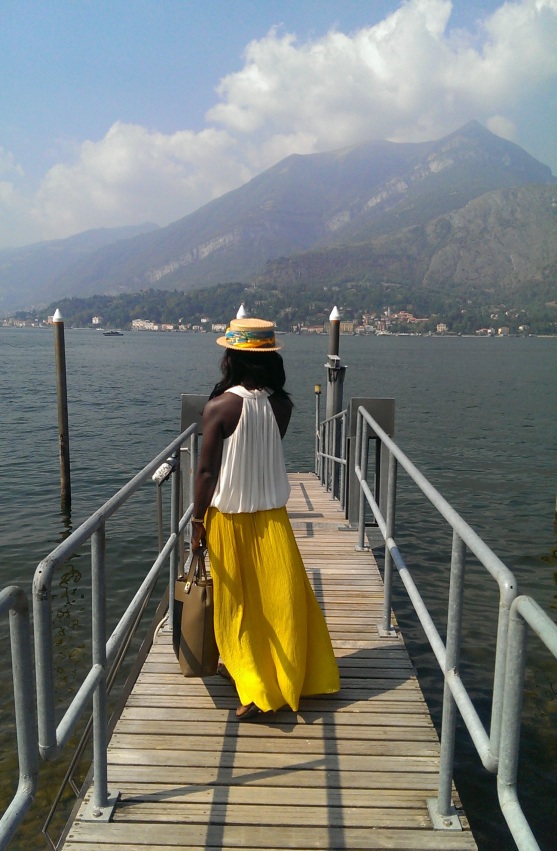 Arriving in  and strolling through Bellagio

The terrace of our stunning hotel, Hotel Grand Villa Serbelloni. Thanks to Bellagio’s mid-lake  location , the village boasts some of the most breathtaking views on the entire lake. I would argue that Villa Serbelloni’s terrace and pool affords the best vista lake-wide 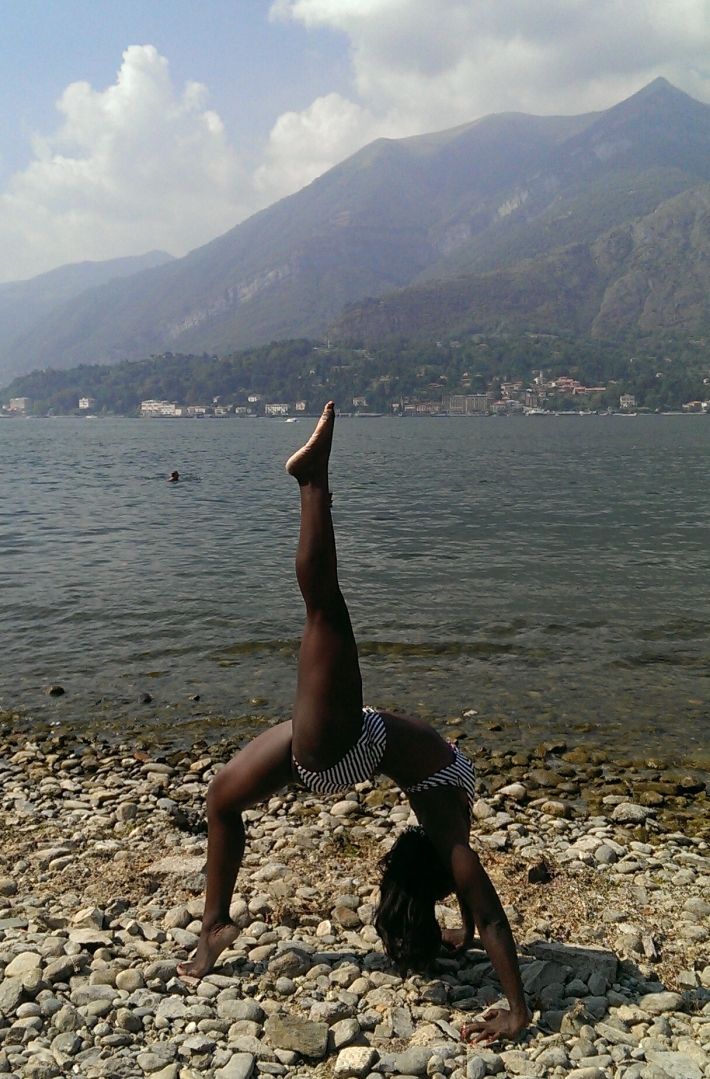 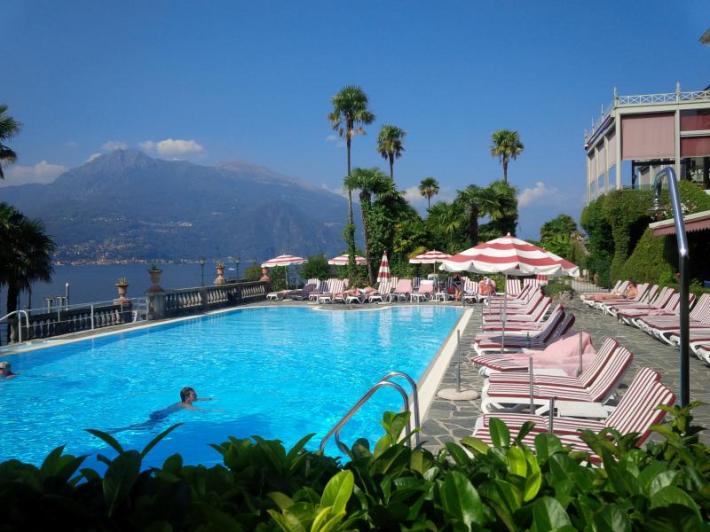 The incredible view from the hotel pool

A vintage style swimsuit potentiates the feeling of being a Bardotesque world. This two-piece is by Diane Von Furstenberg

Vintage sunglass and scarf detail: A two tone pair of vintage frames purchased in Berlin at Lunette Selection and a boater bought on Ebay with my favourite scarf wrapped around it for  a pop of colour. I jokingly called that scarf Vermeer as the blues and yellows are redolent of his  famous palette. Boating on the lake the next day, a gust of  wind  plucked  this very  hat off my head and threw it into the abyss. My heart sank as I saw one of my most prized pieces flutter away; my spirit plummeted when I remembered that I still had my first Hermès (and favourite) scarf still tied to the boater hat’s brim. Yet even then,  I could not have imagined a more romantic way to have parted with hat and Vermeer. If they had to go, Lago di Como certainly makes for a better story than Lake Lanier. 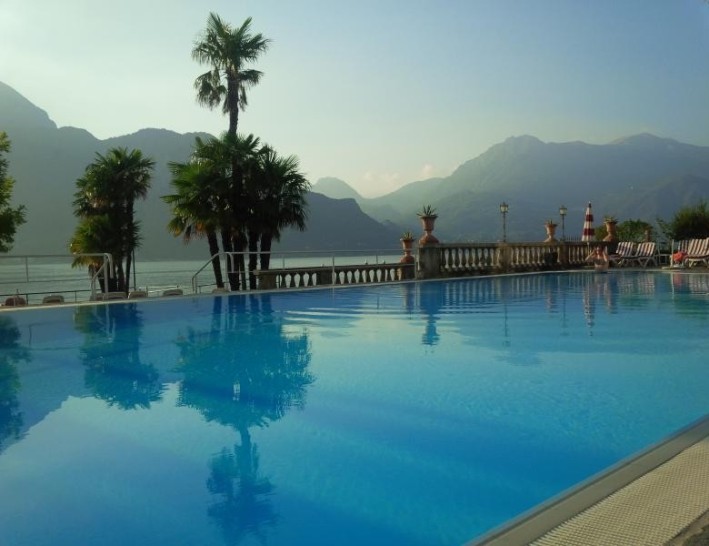 As the sun was swallowed by the hills, the pool lay placid and pristine

In the evening, desperate for a change of clothes but realising I had not packed adequately, I had to get creative.  I tied together the two (completely clashing) scarves I had in  my things and paired the make-shift top with denim for an easy look

Jep’s grand realisation in La Grande Bellezza is this:

This is how it always ends. With death. But first there was life, hidden beneath the blah, blah, blah… It’s all settled beneath the chitter chatter and the noise, silence and sentiment, emotion and fear. The haggard, inconstant flashes of beauty. And then the wretched squalor and miserable humanity. All buried under the cover of the embarrassment of being in the world, blah, blah, blah… Beyond there is what lies beyond. And I don’t deal with what lies beyond. Therefore… let this novel begin. After all… it’s just a trick. Yes, it’s just a trick.

Or simply that, the end is a certainty; what lies beyond is not. One must, therefore, milk what lies in between the two extremes:  the now; today; “the very life of life”.  The book of our existence is ours to write, right now. To discover one’s novel one must seek  the novel;  one must take that step that launches one out of a cycle of sameness,  rather than  glide through existence “like a patient etherized upon a table”. Could there be a better way to come to know the “flashes of beauty” and the “wretched squalor and miserable humanity” (itself beautiful in a sense) of our world than to leave the sameness of home, whether on the wings of a novel or a jaunt across the globe in realisation of one’s personal novel? “They eye has to travel”, you see. “To travel is,” indeed,  “very useful”… even if it is only to tell the story of how a hat and a scarf danced in the winds of Lombardy.  But as Rumi’s ruminations remind: ” do not be satisfied with [my] stories…uncover your own myth”.