I’ve taken quite the hiatus from blogging, working under the radar on some design elements for the cyber incarnation of my life that is this medium. But last night was my Super Bowl Sunday, also known as the Academy Awards and I could not let the opportunity to opine on cinema and fashion’s biggest (albeit frivolous) night; The Oscars present the opportunity for me to get lost in these two favourite  realms of mine. In chronicling this year’s golden globes red carpet, I  discussed both glorious and the gravely gruesome looks. In recapping this valediction to Red Carpet season, however,  I think I will stick to underscoring the looks I found to be the most notable of the night. Most certainly, the trend of the night was– to bastardize the name of a warm up from a former dancer teacher of mine– super jazzy disco diva shimmer!

Remember Jennifer Lopez’s Zuhair Murad dress at last year’s Oscars (probably not). Well, this Versace piece is that dresses older, wiser and far more elegant sister: Art deco inspired realness that shimmers all the way to the bank. The juxtaposition of angles and curves epitomize the beauty of paradox. She is werqing that “Wilde-ian” “tight-rope” for sure! My only quibble with this look is Ms. Berry’s hair: it’s a bit on tall and spikey side for my taste. And as someone on the interwebs pointed out, a pop of colour by way of earring could really have taken this architectural look to a different étage.

This is one of only 2 looks last night that i had not a single point of contention against. She is ravishing here. The dress fits so perfectly and the colour is understated without being washed out. Her vivacious red lip is the kiss that seals the envelope. Old Hollywood glamour executed exquisitely.

And her fiery mane was coiffed to to GODS. Flawless hair, stunning jewellery.

This is a lot of dress. Infact, George Kotsiopoulos, metioned on the E! pre show that he would have put Ms. Lawrence in this very piece. I bet he wet his toga when he saw her walking down the carpet…

While Ms. Lawrence’s hair and makeup and quite lovely and she looks very nice, the look doesn’t arrest me at all. And if there is any night one should stop others in their tracks, it’s the night you win your first Oscar. Perhaps she should have worn less of a dress rather than let this dress wear her. She did however pull of a stunning (and again shimmery) Calvin Klein number at the Vanity Fair after-party 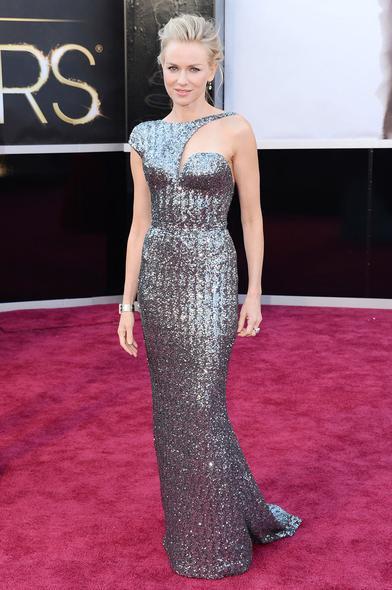 I enjoy this look very much. It was probably the most avante garde of the night. The hair is spot on. I have a strange hangup about the colour of the dress however. I want so badly for it to be a rustier gun metal a la Cate Blanchett’s Armani Privé gown from a few Oscars back. For me that difference would have taken this from gorgeous to sublime.

It is as simple as this: Queen Latifah is always flawless at award shows. Simple and unfussy and appropriate for her physique. 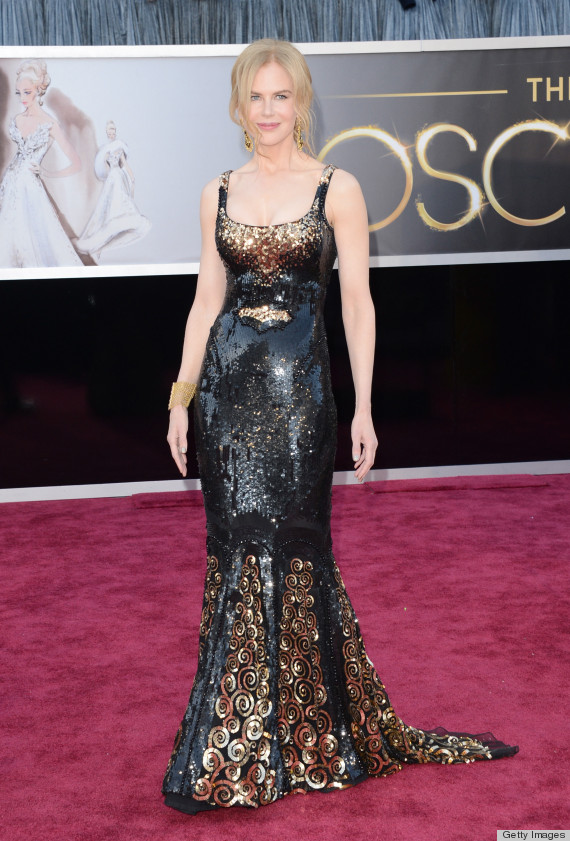 Molten metal marvelousness. I have vacillated about whether or not the hair works and decided I don’t know. What I do know is that she is wreathed what looks like it was poured onto her and allowed to set. The swirls on the bottom of the dress could push it into the jurisdiction of over-theatricality but somehow they don’t. She looks beautiful

This is a darling look. The colour is divine and the bust detailing is the work of angels. I do find Ms. Washington’s hair to be rather lacking in life, and not in that deliberately languid locks look sort of manner. Still, I am a card-carrying member of her stanclub

There was everyone else at last night’s Oscars and then there was Charlize Theron. She came “glad in the light of a pole star”. Head to toe perfection.

The structure of the bodice and the etherealness of the skirt create a most beautiful harmony. It is such a simple and elegant look, yet she had me throwing my hands up and raising my voice in fitful praise (literally) as she glided across my TV screen

The first word that comes to mind: Statuesque. The jewelling on the peplum is just the right amount of detail so as not to besmirch the clean crispness of this alabaster creation. The naked neck is far sexier to me than cleavage or leg and boy is she bringing the sex appeal! 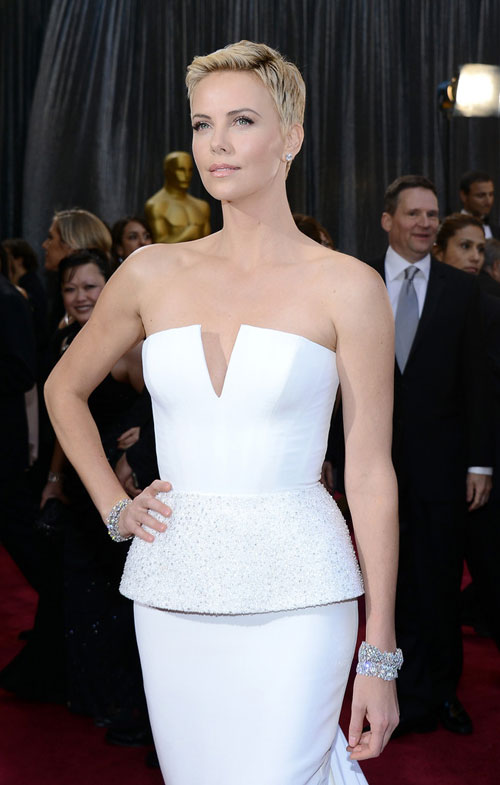 We’ve seen similar silhouettes in the same hue. Anne Hathaway’s Chanel at this year’s Globes and even Kate Hudson’s ODR a few Globes past. Lovely as both women looked, no one has done this silhouette justice like Charlie did last night: so much is to be said for the essence of the woman in the dress and confidence she exudes.

And finally: the hair. Gloria in excelsis deo! The hair makes the look. It’s severe enough to curtail the look from being too bridal or too girly but boxy enough to render the look bipolar. Her make up is so refreshing, her bone structure the stuff of envy. Simply breathtaking!